The group were joined by Uriel who did a great job helping us devise ideas and trial ideas for art and circuit workshops for schools using littleBits.

We had set our group the challenge to develop an art activity using littleBits that they could bring to a school and work with the children.

Kassie raised an important issue, due to the expense of littleBits anything using littleBits would need to be extracted at the end of the session to be used again. This could disappoint children who had worked hard developing an idea. Uriel reckoned he didn’t mind and proved this at the end of the workshop by dismantling his work.
A solution could be to create a film that would become the main work, Harriet and Charlotte suggested creating a sound track for the film with littleBits, there are time issues with this idea.

Kassie suggested creating Robots as it fitted well with the types of sounds produced by the Korg Kits by littleBits. We decided to all have a go at making Robots to see what challenges rose.
Uriel had an idea to create a machine that would dispense chocolate when a coin was put in a slot. We discussed this and thought a machine and a Robot have a lot in common so we devised a Robot that would dispense chocolate.

Uriel drew some classic Robot eyes and worked out how to light them up, he tried various sensors, sound, switch but chose a movement sensor which was place where a nose would go if a Robot had one. 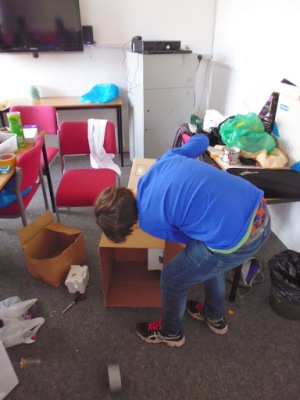 The vending of chocolate was a real challenge Uriel worked through all the problems discussed it with Nic, he ended up using a motor to turn a tube with a hole in it which would catch and dispense a Malteaser. 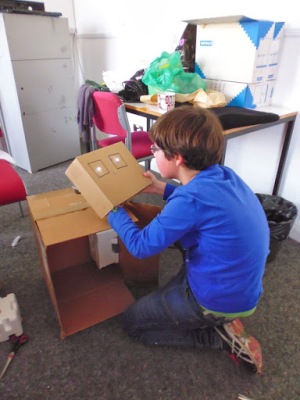 The dispenser for chocolate ended up inside another box using orange connector wires, Uriel also added a buzzer that made an annoying noise every time a Malteaser dropped. From the workshop we began to realise how hard it was to make simple ideas happen and it was important to be inventive. The group hope to visit a school in May 2014 to hold a Robot workshop.
https://www.youtube.com/v/rJcpdrOXnJ4?version=3&f=user_uploads&c=google-webdrive-0&app=youtube_gdata

At the end of February @artlabuor and @unirdg_art Reading School of Art took part in Tate Exchange with #ReadingAssembly. We were joined by wonderful pupils from local Reading school, New Christ Church Primary, exploring the theme of Power. It is so inspiring to look back on this now, when we are challenging and difficult times, and be energised by pupils exploration of the power they hold within themselves and the freedom creativity can bring. . To watch the full video and learn more about @artlabuor ArtLab check the link in our bio . . #wearepowerful @Tate @tateexchange @uniofreading #artlab
We’re back at Tate exchange on Friday working with local Reading school New Christ Church. @unirdg_art #repost @tateexchange 🌀 How does power shape your particular community – your school, workplace, family or neighbourhood? How does technology affect the ways in which power is shared and exercised in society? Can art enable us to think about these questions? And does power shape our relationship to the gallery and to art itself? Drop in to a three day participatory programme with @uniofreading exploring the meanings of power through crafts-based workshops, staged encounters, performances and collaborative games. From Feb 28th to March 1st.
Congratulations to former ArtLab co-researcher Ajay! #repost @art_clubbers art_clubbers LOOKS LIKE WE FOUND OUR NEW HEADLINE!! Check it out this amazing article written by @uoralumni about our Managing Director @ajay_pabial ‘s journey from graduating to setting up @art_clubbers ! Our team know exactly what it feels like to come out of higher education and the difficulties encountered when navigating through the creative industry! READ MORE ABOUT OUR JOURNEY - LINK IN BIO! #reading #graduates #alumni #creative #community #clubbing #firststeps #journey #article #story #university
And another ... 😍