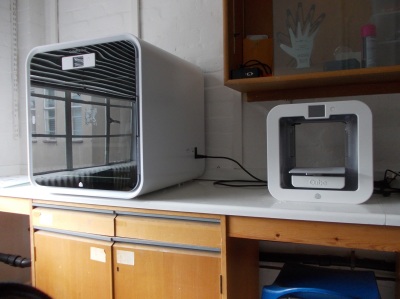 The CubePro is shown in the image above on the left. The week before last one of the extruders became jammed, which meant that it had to be removed, dismantled and then examining to see where the blockage came from.

Here’s what I had to do according to the procedure supplied by Cubify:

1. Level the plate and uninstall filament from the other extruder.
2. Switch off the machine, unplug the circuit board form the rear of extruder #1, and then remove the plate that holds the filament tubes in place.
3. Remove the torx screw holding the extruder in place.

It came apart quite easily, and was easy to dismantle the extruder. The filament had snapped in the filament tube (which I already knew about) but this then became lodged in the extruder itself, and prevented new filament from being installed. The blockage was removed and the extruder refitted.

Then came the fun part of levelling the plate using the setup program. It seemed to work okay, but then you also have to go through the procedure of calibrating the plate (z-gap) so that the filament dispenses evenly, and this took over an hour to get right. The big problem with this is that Cubify rather stupidly chose coarse threads for the machine screws that are used to adjust the print plate. The upshot of this is that you need to turn the screws a microscopic amount to calibrate the plate properly. A fraction of a turn too much and the filament either does not fuse properly, or overlaps too much. It takes a lot of effort of trial and error to get this right.

After finally getting the z-gap correct (well as near as I could get it) I did a test print for a tooth paste dispenser. Here is the result:

[Image to be added later]

I don’t think the quality of print is as good as the little Cube 3. It should be better, so I guess it still needs work to get it right.

0 comments on “Unblocking the print head on the CubePro”