During the ArtLab Intro session we discussed a Widening Participation Workshop and The SPHERE Research Project. After introductions to the projects, we divided up in to two groups and spent 45mins brainstorming each idea then swapping. We hope to hold more sessions this term and next as there was a lot more to find our and experiment with.

Widening Participation Workshop Antonio Portas suggested we create a based on the City X Project and our Creature in a Cup workshop that would encourage creativity, invention and develop knowledge about 3D software and 3D printing. The City X design project for children aged 8-12 uses the idea of people colonising a planet, who only have a 3D printer, requesting Earth to help them create things that don’t already exist to help solve their problems. 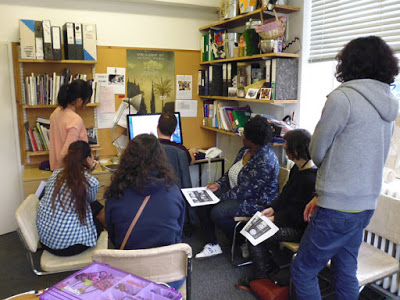 We looked at the City X project resources, including the 3D modelling software Tinkercad and the video message from the City X Mayor, as we watched this video one of the ArtLab students, Katy said “thats my brother!” Still reeling from this coincidence, we discussed how we might combine some of the ideas of the City X project with how we work with the Creature in a Cup workshop exploring more of an art based angle, with the idea to make it appeal to older students.
We had noticed that the International Space Station was reported in the news 28.10.15 to have printed ratchet wrench from the new 3-D printer aboard the International Space Station. http://www.bbc.co.uk/news/science-environment-30549341
“The printer completed the first phase of a NASA technology demonstration by printing a tool with a design file that was transmitted from the ground to the printer. This demonstrated that a 3D printer works normally in space. In general, a 3D printer extrudes streams of heated plastic, metal or other material, building layer on top of layer to create 3 dimensional objects. Testing a 3D printer using relatively low-temperature plastic feedstock on the International Space Station is the first step towards establishing an on-demand machine shop in space, a critical enabling component for deep-space crewed missions and in-space manufacturing.”
We discussed producing items for the space station, from tooth picks to spare parts and that people would need art as well as tools if they were to inhabit space. We thought it would be interesting to propose a project where students created the first art exhibition for the International Space Station. This could entail practical design problems such as how to deal with zero gravity when exhibiting the work etc and well as great potential for creativity and invention. The workshop would encourage students to create a prototype gravity version for Earth using littleBits and various materials and a Zero gravity version to be sent as stl files for the 3D printer in the Space Station.

The group looked at the intro to fashion trends and wearable technologies that fashion designer Ella Sharp had presented to SPHERE researchers including the video of Hussein Chalayans collection from 2007. We explained that the SPHERE projects aim is to create wearables for monitoring health in the home, but that to make the idea of being monitored become desirable/acceptable the clothes needed to be inventive and appeal to people so they would want to wear them. So coming at the problem an art perspective gives another layer of potential for the researchers ideas. The issue of whether the idea of creating clothes that monitor you was ethical was also discussed and raises interesting complex issues.
https://www.youtube.com/embed/Ae81FcczsI8?feature=player_embedded
The image below shows Laura and Nic working who have been working on the SPHERE with half the group exploring how sensors could be installed into clothing as part of the SPHERE research project, we had various clothes available for people to try embedding the sensors but the designer model drawings were most popular. There were some really interesting ideas, we need more time to explore how they can be embedded into clothes or into the material itself.

A few example of initial ideas for Wearable Sensors. (you can find them all on the ArtLab SPHERE page)