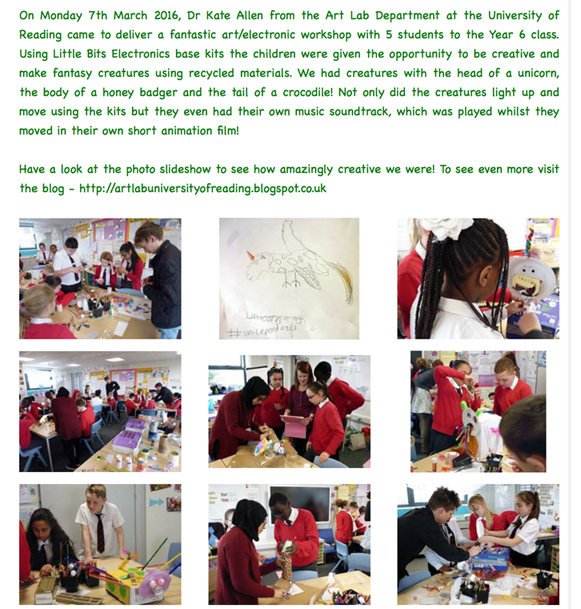 We were invited to St Michaels Primary by Janine Beckers the Art coordinator St Michaels Primary. She wrote to ask if we could suggest ways to make lessons more fun and exciting. We offered to run our Creature in a Cup workshop but we only had a 2 hour slot with the class so this was a new challenge to the ArtLab team. We kept the workshop idea but removed the story development about the creature for the performance. We hope the creatures might inspire some further story development. We shortened the time the pupils had to experiment with the electronics kits and build their creatures, but this didn’t stop the class making some fantastic kinetic creatures.

“Thank you very much to you and the students who came along on Monday afternoon. I felt the workshop was a huge success! The nature of the activity, the challenge involved in the task, and how teamwork was promoted throughout was suitable for a year 6 class. The class thoroughly enjoyed the workshop and found the electronics kits you brought along very exciting. They were certainly enthused and inspired to be creative and use their imaginations to make such interesting creatures! A wonderful idea!”

The pupils managed to get a lot done in the two hours as you can see from the following images and videos. They demonstrated their creature and made a soundtrack created with Littlebits Synthkits.

The pupils worked together in groups to design a creature from three different animals, below are some of their drawings. 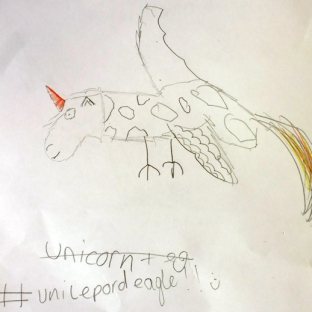 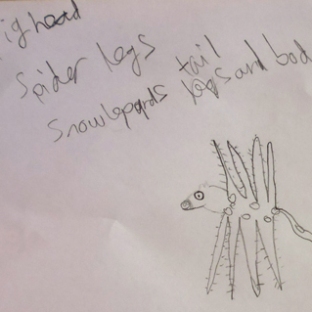 The following images show the creatures in development.
Ben with group