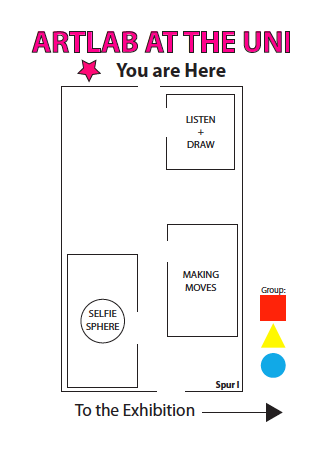 In previous years artlab’s summer projects have been held at schools, usually in pupils regular classrooms.  This presented both advantages and disadvantages; pupils were comfortable in their space and we were able to learn about the activities and values of their class through the displays in the space.  At its most advantageous, this meant being able to adopt the classes usual routines, and engage with art works and study topics they had covered, drawing links between the day’s activities and what they were learning.  We were also conscious that this stability may support pupils with extra learning needs for whom routine was important.  Disadvantages included teachers and pupils were often subject to distractions and interruptions, and many teachers took the opportunity to catch up on extra work, rather than engage with the content of the workshops.

Following Tate Exchange 2019 we took the decision to develop three of the activities delivered there, continuing the format of small groups of 10 pupils paired with artlab co-researchers, and situate it in the department as a take-over or summer school.  Each activities had its own room.  Over the day we occupied different spaces; from the first warm up and brainstorming exercises, the first self-organised class portrait, through each of the activities to the final 360 group whole group selfie.  We moved through the different spaces in the art department which was populated with art works from the degree show, to the landscape outside, in rooms of a different scale to some of their school ones.

Locating activities in separately rooms appeared to increase concentration levels; pupils were no longer distracted by what others were doing, rather everything in the room was populated with ‘material’ for their activities. Utilising the colour coding from Tate also made it easier to guide the groups across different activities.  Each room placed the pupil’s production (and that of previous groups) at its centre.  In the selfie sphere room this took the form of a room peppered with consciously self-made images, exploring different forms of representation and self-expression across painting, drawing and photography. At its centre was the reflective sphere, a device for observing your image. Due the softness of the image reflected it encouraged impressions rather than tying pupils to a test of observation skills.  Instead they were encouraged to depict themselves as they wished to; future selves, digital and avatar selves, costumed selves, cartooned selves, and in as little or much detail and coloured as they wished. Including everyone in the space, the 360 go pro then reiterates the group as subject, producing these incredible malleable images suggesting collaboration, theatre, globes, and portals.

These actions were intended to encourage an ownership through habitation and occupancy of space.  Though they were in a place which from off campus or outside may seem unapproachable, mysterious or for others and unknown activities within, the art activities in conversations inside were intended to dismantle this austerity, and promote the idea of creativity, education and a place open to all.

The groups of 10 were accompanied by two student co-researchers and a parent/TA/teacher from their school.  This meant Reading students were able to bounce off, and learn techniques for supporting the group from each other, and promoted the activities as a conversation rather than something ‘led’.  Furthermore, though classes had a class teacher who was in charge, because they were accompanied by a variety of members of school community, and were away from school, each person participated, no matter what their position, or age.  The level of investment and interest from teachers appeared far higher than other years, and due to the nature of the activities; where each persons making contributed to a larger whole, they were able step into activities.   Alongside high levels of pupils concentration we observed very low levels of behaviour problems and significantly less than in classrooms in previous years.

In conversation during the day, anecdotally several teachers expressed the increasing difficulty in finding funding to go on school trips, with one teacher explaining they were only able to go on ones with zero cost, walking distance from the school.  Other schools appeared in much more secure situations, with significantly more provision for example through PTA funding capacity or management’s protection of external trip funding, and the contrast between these two positions seemed very extreme.

Images; artlab co-researchers work-shopping the activities and narrative of the day in the weeks prior to starting.  Below; Final form of Listen & Draw room.

Mobile ArtLab. Out and about!
GIF Generator Mark I
Pink
Washing Machine Crane 2021